Let it be is a great emotional toughness strategy 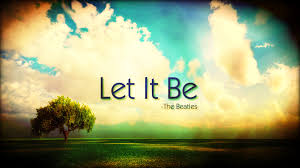 My first album was “Let it Be” by the Beatles. There are so many songs on the album that are pure magic, like Across the Universe, Long and winding Road, and of course, the theme song “Let it be”. I played that album until the grooves wore out.

Then, by chance, I came across the amazing story as to how Paul McCartney created this magical tune. While McCartney had many career highs, much of 1968 wasn’t one of them. The Beatles’ career was winding down and the break-up was looming. Single at the time, he was staying up late, drinking, clubbing, and as he put it, “wasting his life away”

Paul mentioned that at this time in his life, he was depressed and not feeling too good about himself. Comfort came one night for him during a dream he had of his mother, Mary. She had died when he was only 14 and he could barely remember her face. But in this dream, her face appeared crystal clear, particularly her eyes. She said only 3 words to him in a gentle, reassuring voice, “Let it Be”

McCartney knew this was a message he so desperately needed–his life would work out and that he just needed to go with the flow.

Soon after waking, Paul went to the piano and started writing the now-famous lyrics, “When I found myself in times of trouble, Mother Mary comes to me, speaking works of wisdom, let it be”.
“Let it be’ became McCartney’s anthem and it’s one of the songs he is best remembered for with the Beatles. As he described it, writing that song felt like magic.

Applying the philosophy of “Let it be” to the business world can help you to accept the inevitable downturns. When they occur, and they will, some business people will lose their resolve. Others panic and begin to doubt themselves or even lose confidence in their abilities. In some extreme cases, what started as a negative turn became a terrible slump.

Be Like Paul. Accept the times when you are struggling and learn to go with the flow. Don’t start over analyzing your strategies, and lose confidence in your past successes. Behind every successful person, Paul McCartney included, are times of repeated failure and feelings of despair.
More than 150 years ago, Charles Dickens’s knew this to be the human condition when he wrote the memorable words “It was the best of times, it was the worst of times”. Your business life will cycle with many peaks and valley. Don’t let a valley throw you off course. There is great wisdom in the principle of Let it Be.

Bio: Dr. Gregg Steinberg is a professor of human performance at APSU. This column is adapted from his Washington Post bestselling business book, “Full Throttle” Dr. Gregg speaks to businesses about mental and emotional toughness. Email mentalrules24@msn.com or see www.drgreggsteinberg.com