Get a Best Friend’s Journal 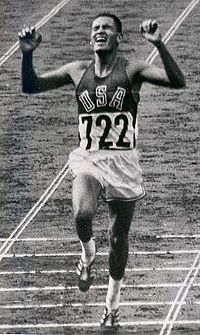 Billy Mills’ story rings true of the Olympic dream. A Native American who grew up on a reservation, he earned a track scholarship to attend the University of Kansas. However, Billy had many difficulties as a Native American at what was virtually an all-white school. Consequently, he dropped out and joined the army where he began training for his dream, an Olympic gold medal.

Mills knew that in order to be the World’s best at the 10,000m, he not only had to train his body, but also his mind. To accomplish this goal, he kept a journal and every day he would jot down positive self-statements about the upcoming Olympics in Tokyo. He wrote such affirmations as: “You are going to feel great the day of the Olympics” and “You are going to have great energy in Tokyo”. Mills believed the subconscious mind and the conscious mind cannot differentiate from one another. By repeating positive self-statements, you will believe them full-heartedly.

Billy did respond amazingly to all his positive self-talk and self-reinforcement. In the Olympic finals, Mills was only third as he came to the home stretch of the race. Then all his training came to fruition and he said, “you can win, you can win, you can win”-With those words came an incredible last kick, Mill pulled off one of the greatest upsets in Olympic history of track and field coming from behind to win the Gold Medal.

Self-talk is actually a type of self-hypnosis. By repeating positive self-statements over and over again, Mills hypnotized himself into believing in his excellence. He created a continuously playing positive mental tape that boosted his energy when he needed it most, at the last leg of his race.

But self-talk goes beyond self-hypnosis. Our thoughts create neurological impulses in our brain, and these impulses stimulate new pathways in the brain. Repeated thoughts become stronger and more available. Positive self talk can super charge our emotions, making us super performers.

Unfortunately, many people fall flat from their negative mental tape playing in their heads. Dick Ross had this problem. Every time he would meet an important client or had to present to his colleagues, he would say, “Don’t mess up again” or even worse, he would berate himself with the statement, “Don’t be a stuttering fool again”. As a child, Dick had a problem speaking with a stutter. Now, when he gets into pressure situations, this old mental tape gets replayed. With his destructive self-talk, Dick is strengthening his brain structure the wrong way, to choke under pressure, and as a result, he has never reached his potential in his field.

Do you have a negative tape continuously playing in your head? Is it hurting your performance and potential?

If yes, then you need to develop a best friend’s journal. Check out the emotional toughness training course to see how.